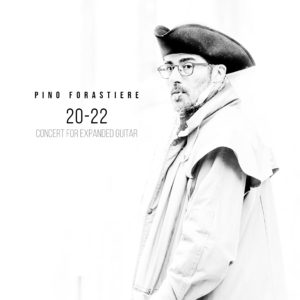 “20-22 Concert for Expanded Guitar” is a single track lasting 31 minutes and 27 seconds; a musical fluid that blends notes, sounds, noises, and twentieth-century quotations, in an unprecedented texture of contemporary soundscapes.

20-22 is performed and recorded live, with a prepared 19-string guitar and electronics.

The structure is organized in 7 different Sections from A to G of variable lenght.

– from the LAB Guitar, sounds obtained by scratching, percussion, bottleneck. Those sounds are recorded by a Loop Machine, manipulated live by altering the signal at half speed, double the speed, reverse.

– In the sections A B D F, an hexaphonic pickup is also used.

This is special music. Pino is that most perfect and rare paradox in art – A restless mind that can never be satisfied, but a soul whose quest is simple and pure, namely the quest for beauty.
He’s expanded the guitar to the point that it conforms totally to his will, even physically, becoming a new machine that can express a vast palette of feelings and moods. And he uses this to build musical architecture, crystalline cathedrals of sound. And you get to step inside. Don’t pass up that opportunity.
– Jon Gomm

This website uses cookies to improve your experience while you navigate through the website. Out of these, the cookies that are categorized as necessary are stored on your browser as they are essential for the working of basic functionalities of the website. We also use third-party cookies that help us analyze and understand how you use this website. These cookies will be stored in your browser only with your consent. You also have the option to opt-out of these cookies. But opting out of some of these cookies may affect your browsing experience.
Necessary Always Enabled
Necessary cookies are absolutely essential for the website to function properly. This category only includes cookies that ensures basic functionalities and security features of the website. These cookies do not store any personal information.
Non-necessary
Any cookies that may not be particularly necessary for the website to function and is used specifically to collect user personal data via analytics, ads, other embedded contents are termed as non-necessary cookies. It is mandatory to procure user consent prior to running these cookies on your website.
SAVE & ACCEPT